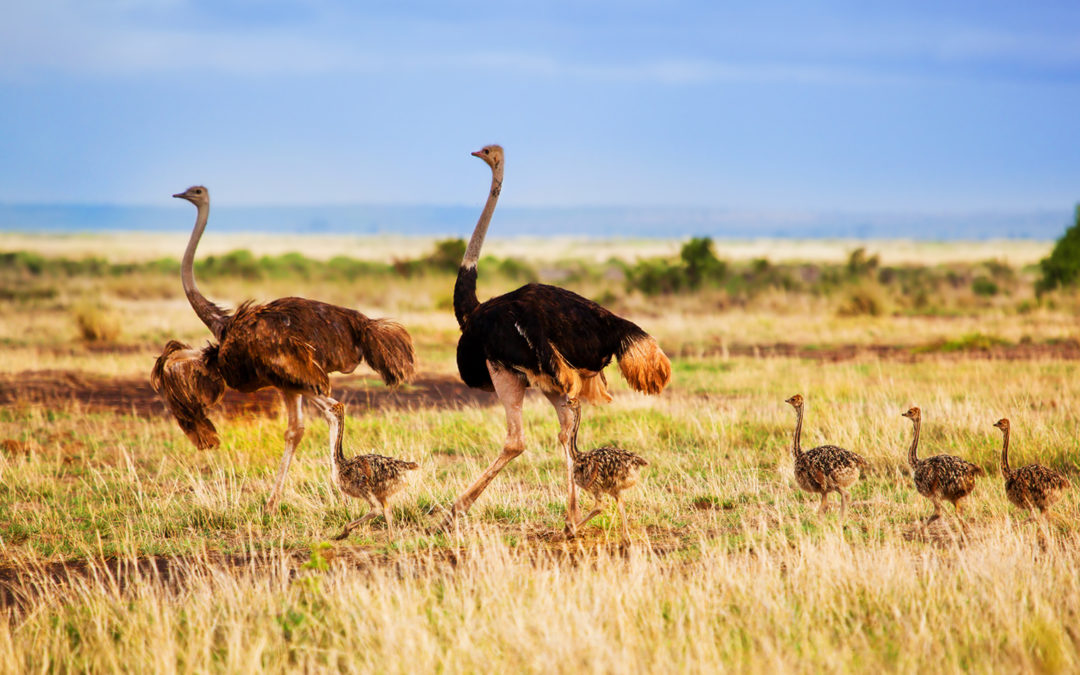 The Ostrich (Struthio camelus – meaning ‘camel-like’) is the worlds largest flightless bird which is native to the savannas and grasslands of South Africa. It has also been introduced to Australia. The ostrich is a member of the ratite (which means flightless bird) family of birds. It is the only living species in the family: Struthionidae and a member of the order:

Ostriches can grow to measure 1.7 – 2.8 metres (5.5 – 9.4 feet) in height and weigh 130 – 150 kilograms. Despite being flightless, Ostriches have small wings that are covered with fluffy feathers. The wings are too small to lift the Ostriches heavy bodies off the ground and into the air but are used as rudders when the bird is running to help it change direction.

Ostriches have long, bare necks, a flat, broad beak with a rounded tip and large eyes. They have long, powerful, bare legs and strong feet with 2 sharp claws on each foot which are used for defence. Their massive leg muscles enable them to deliver a powerful kick which could seriously injure or even kill an attacker. However, Ostriches can only kick forwards.

Ostriches contain their main musculature in the hips and thighs. The long legs enable the Ostrich to run at speeds of over 65 kilometres per hour (40 miles per hour). A male Ostrich has a black plumage with white wing tips, however, females and chicks have a brownish, more duller plumage which helps them camouflage.

In scorching desert conditions where temperatures may rise above 120 degrees fahrenheit, the Ostriches body is fine-tuned to stay around 18 degrees less. Any higher than this disrupts the Ostriches internal chemistry. Therefore, the Ostrich uses anatomy, physiology and behaviour in order to stay cool. Ostriches also have acute eyesight and hearing and can sense predators from far away.

The Ostriches preferred habitats are savanna, scrub, grasslands and semi-deserts. Ostriches enjoy water and often take baths where water sources are available. They are good swimmers too.

Ostriches are omnivorous and will eat almost anything they can find. They eat a variety of foods from seeds and plant matter to lizards and frogs. Ostriches have no teeth and therefore often swallow pebbles to help with digestion in the gizzard. Food collects in the crop then slides down the neck in a bolus. The ostrich has intestines 14 metres long so that it gets the most out of the tough plants it eats. They are able to go without water for several days surviving on the moisture from plants instead. They are also capable of making their own water internally.

Ostriches have a nomadic lifestyle and are mostly diurnal, active early and late in the day. They roam around the savannas in groups of 50 birds. Males are territorial and will defend their territory aggressively.

Ostriches do not really bury their heads in the sand. When an Ostrich is threatened, it will lie flat on the ground to appear less obvious or run away. If caught, the Ostrich will kick out at its pursuer with its powerful legs.

An Ostrich will also use posture to intimidate a rival or predator whereby it will fluff up its wing feathers and hiss loudly. Ostriches are designed for speed and most will comfortably outrun their predators which include lions, leopards and hyenas. Ostriches are very vocal birds and vocalizations include whistling, booming, hissing and snorting.

During the breeding season around March/April, male Ostriches fight for harems of 2 – 7 females with which to mate with. They defend their territory by patrolling and displaying and by making loud booming calls. They also inflate their bright pink necks. Ostriches engage in a unique form of co-operative breeding.

Ostrich eggs are around 16 centimetres in length, weigh 3 pounds and are glossy and cream in colour. They are the largest bird eggs of all. Once hatched (after around 6 weeks), the brood of up to 40 chicks form creches. Sometimes Ostriches steal chicks from other birds to add to their own brood to make it larger.

The male Ostrich is the main carer. The tiny ostriches immediately learn to follow the male, clustering around his feet as they try to keep up with the sometimes formidable strides (3 – 5 metres long) of the group. The male Ostrich shows the chicks how to feed and protects them from predators and the elements using his wings to shelter them from the hot sun.

During their first year, Ostrich chicks grow around 25 centimetres per month. Ostriches become sexually mature between 2 and 4 years of age although females mature around 6 months earlier than males. The life span of an Ostrich can be up to 75 years with around 50 years being typical.

Ostriches are farmed in some parts of Africa for their skins and meat. Although Ostrich numbers have drastically declined over the last 200 years, they are still classed as ‘Least Concern’. There are around 2 million Ostriches worldwide.

The Ostrich has the largest eye of any land animal. Its eye is bigger than the worlds smallest bird, the Bee Hummingbird. Their eyes measure 2 inches (5 centimetres) across.

A female ostrich shows remarkable ability to recognize her own eggs even when mixed in with those of other females in their communal nest.

The Ostrich is unable to fly and does not have a keeled sternum (breastbone) common to most birds.

When fully grown, an ostrich has one of the most advanced immune systems known to mankind.

Ostrich skeletons and fossils have been found dating back over 120 million years which means Ostriches are true dinosaurs.

There are 3 main species of ostriches of which only one, the Struthio Camelus Domesticus (the African Black), is found in captivity.

One ostrich egg is equivalent to the weight of about 24 chicken eggs.

Ostriches are attracted to small, shiny objects and peck curiously at them.