3 Healing Benefits Of Honey On Skin 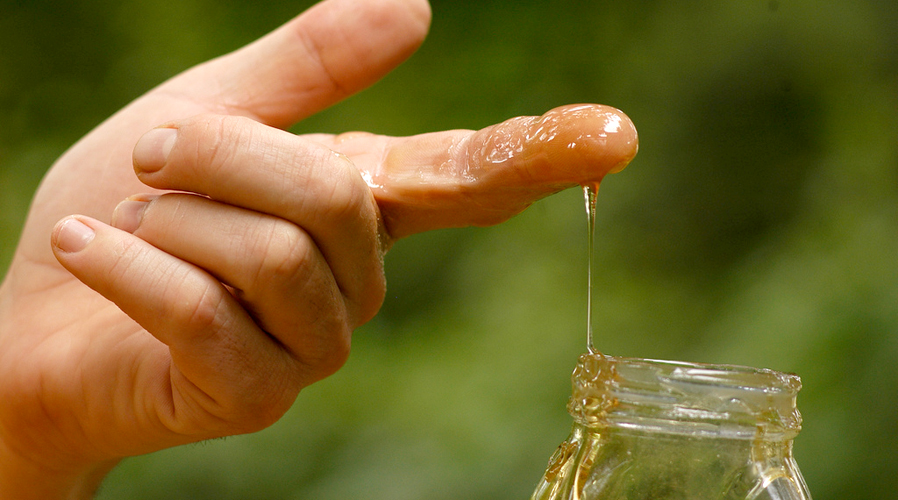 Honey isn’t only delicious and good for our insides; dabbing some honey on your skin can provide a host of benefits. Here are some benefits of honey on the skin.

You might spread honey on your Mary’s Gone Crackers and drizzle it in your organic Greek yogurt, but have you ever considered smearing it all over your face? Believe it or not, honey ain’t just sweet for your food, but also for your skin.

The benefits of honey on the skin are plentiful, so you should consider keeping a jar not only in your kitchen pantry but on your bathroom vanity as well. Unfortunately, honey’s reputation as a healing agent was relegated to that of an old wives’ tale in the 20th century, after the discovery of penicillin heralded the widespread use of antibiotic drugs to combat infections.

Because it’s relatively cheap and can’t be patented, the benefits of honey on the skin aren’t widely touted. But, indeed, honey is just as good for your outside as it is for your insides. It’s known to soothe and disinfect the skin, making it an unconventional moisturizer, antiseptic, and antibacterial solution.

Here are three healing benefits of honey on the skin. Keep in mind that many of the beneficial properties of honey are lost in the pasteurization process, so you want to be sure to use raw honey. Pasteurized honey is akin to dead sugar; no point in using that!

3 Benefits Of Honey On Skin

Clinical trials have shown that honey is an effective broad-spectrum antibacterial agent. It’s got so much oomph that it can even stop the “superbug” MRSA from growing. (MRSA is methicillin-resistant Staphylococcus aureus, a “staph” infection that is resistant to antibiotics and kills more people annually than AIDS).

According to the BBC, a man by the name of Sam Edwards from Wrexham, Wales credited honey with saving his leg! After being cut by a koi carp, he became infected with Mycobacterium marinum and developed a rare skin condition. After applying honey compresses for eight days, he found the bacteria had completely disappeared without his taking a single antibiotic.

If it can lick Mr. Edwards’ nasty bug, imagine what it can do to acne, which stems from inflamed sebaceous glands in the skin that can become infected by bacteria. It turns out honey also naturally absorbs excess oil, which helps prevent acne – and that means one of the benefits of honey on the skin is you can use it in place of many chemical-laden over-the-counter acne creams and ointments.

Bacteria and germs simply won’t survive when covered in honey because of its highly acidic pH. In fact, microorganisms get trapped in honey’s sticky, acidic base and eventually die; the environment is too abrasive for their membranes. In other words, putting honey on bacteria is sort of like putting salt on a slug.

While lotions are full of toxic ingredients like parabens and phthalates, raw honey is loaded with minerals, vitamins, antioxidants, and natural enzymes that literally nourish your skin from the outside in. Honey also attracts and retains moisture.

3. Honey Is A Powerful Wound Healer

According to a review published in The Scientific World Journal, the benefits of honey on the skin are well-established in the medical field, particularly for treating burns, ulcers, and other wounds.

The authors of the review concluded that honey is “a natural and safe wound healer” due to its many therapeutic properties, which include “stimulation of tissue growth, enhanced epithelialization, and minimized scar formation.”

Honey also contains an enzyme that produces hydrogen peroxide, a well-known disinfectant. A thin coating of honey can be applied to the skin to disinfect and heal minor skin wounds and chapped lips.